The Harry Potter series is a coming-of-age story in many ways, a story that matures with its readers, moving from the innocent adventures of an eleven-year-old, to the angst and social entanglements of a fifteen-year-old, to the pain and sorrow and battle and joy of adulthood.  It is a story of students, of learning, of education, of school.

And thus, in many ways, it is a story of teachers.

As a teacher myself, I’ve found it interesting to place modern pedagogical theory side-by-side with the practices of the various Hogwarts teachers.  I don’t know if Ms. Rowling has any training in education, but she certainly describes several teaching styles quite accurately.

When we think of school, what many of us think of (or remember) is the teacher telling students what to know, and the students copying that information down on notes in order to spit it back out for the exams.  This is known as the Teacher-centered model of teaching, or the tabula rasa (blank slate), because the idea behind this is that students are empty vessels waiting to absorb knowledge.
“All these ideas, teacher as knowledge knower, student as knowledge receiver, sound fairly logical and, indeed, some of them are deeply rooted in our culture.  The models, however, are largely based on a few assumptions that we need to examine seriously…  The problem with teaching as telling is that it is overwhelmingly a one-way street… listening for long periods of time is downright wasteful, if not impossible to sustain, for most students.”  –Leila Christenbury, Making the Journey: Being and Becoming a Teacher of English Language Arts

This doesn’t mean that teachers should never impart information, should never give lectures, should never talk.  On the contrary, sometimes that is downright necessary.  But a teacher who relies solely on this mode of teaching will have a hard time maintaining student engagement, cannot tailor his or her classes to suit the needs of his or her particular students, and will be doing most of the work.

At Hogwarts, Professor Binns perfectly embodies this pedagogy.  We first met him in The Philosopher’s Stone, teaching History.  “Easily the most boring class was History of Magic, which was the only one taught by a ghost.  Professor Binns had been very old indeed when he had fallen asleep in front of the staff room fire and got up next morning to teach, leaving his body behind him.  Binns droned on and on while they scribbled down names and dates, and got Emeric the Evil and Uric the Oddball mixed up.”

This seems far more a criticism of Binns’s teaching style rather than of history in general, for after all, history plays a crucial and interesting role countless times throughout the series.  We get a deeper look at his classroom in The Chamber of Secrets, when Hermione shocks the undead Professor by actually asking a question, and the interest the class takes in his answer completely throws him off-balance.  The protagonists (excepting Miss Granger) routinely fall asleep during his class.  It is a surprise to no-one that few do well on their History O.W.L.s

It could be argued that some other of the Hogwarts staff engage in teacher-centered teaching, arguably (such as Lockhart, who really engages in Lockhart-centered teaching, or Umbridge, whom we will examine later), but I find that Binns practically embodies the traps and downfalls of this pedagogy.

2)  Teacher as Authority/Textbook as Authority:  Professor Umbridge
“‘We will be following a carefully structured, theory-centered, Ministry-approved course of defensive magic this year.  Copy down the following, please…’“‘Yes,’ said Hermione.  ‘Surely the whole point of Defense Against the Dark Arts is to practice defensive spells?’“‘Are you a Ministry-trained educational expert, Miss Granger?’“‘No, but–‘“‘Well then, I’m afraid you are not qualified to decide what the “whole point” of any class is.  Wizards much older and cleverer than you have devised our new program of study.'”

A trap that it is very easy for we as teachers to fall into is to see themselves, or the textbook, as an unassailable authority that cannot be questioned.

As Socrates famously said, the unquestioned life is not worth living.  Teachers can be wrong.  Textbooks can be wrong.  Students should be encouraged to dialogue–respectfully–with their teachers, to ask the whys and the wherefores, to question and to engage.  And we teachers need to practice not being defensive when that happens.

Dolores Umbridge, regardless of her ulterior motives in trying to undermine Dumbledore’s nonexistent coup, is an authority-centered teacher.  Her lessons always begin with the command “Wands away,” followed by a reading assignment, and “There will be no need to talk.”  She does not allow the text, or the Ministry’s guidelines, to be questioned.

(Of course, Umbridge as High Inquisitor is more interesting than Umbridge as Professor–you can see her Inquisition as a not-so-subtle dig at the government’s idea of educational reform.  But we are restricting ourselves to pedagogy today.)

(Hermione, interestingly enough, has picked up a little of the textbook-as-unquestioned-authority mindset.  In The Half-Blood Prince, she stubbornly sticks by the textbook’s instructions, regardless of whether Harry’s marginalia suggests better methods.)

Regardless of spoiler-laden plot developments later in the series, I don’t think anyone can argue that Snape is a good teacher.  He plays favorites, abuses his classroom disciplinary system, belittles struggling students such as Neville, and overall doesn’t do much to help his students achieve.  While he certainly sees himself as an unquestionable authority, it could also be argued that Snape is the sort of teacher for whom the management of the classroom, the system of the classroom, or the subject itself has become more important than the teaching.

“The first days of every school year I created; for the next thirty-six weeks I maintained my creation.  My curriculum.  From behind my big desk I set it in motion, managed and maintained it all year long.  I wanted to be a great teacher–systematic, purposeful, in control…”  –Nancie Atwell, “In the Middle”
“Sitting there at my big desk, developing new assignments and evaluating the results, I remained oblivious to… my students’ ideas, experiences, and expertise.  I remained in charge.”  –Nancie Atwell, “Everyone Sits.”

Now, to be fair, for much of the series we encounter Professor Snape through Harry’s eyes–the eyes of the object of Snape’s ire.  And yet I think we get more objective assessment of Snape’s teaching through his replacement–through the fact that, when Slughorn takes over teaching Potions, the lessons become far more interactive and friendly, with little competitions (complete with prizes) added.  Snape used no such thing: his students’ only motivation to succeed was to avoid his belittling comments.  Snape is far more interesting in maintaining his system, his order, his class, than he is in the students in it.

All the same, some teachers whose classrooms often go off-task–like Hagrid, for instance, or Trelawny–could use a little more of the classroom-creation to keep their students engaged.  Not nearly so much as what Snape uses, but surely there is a happy medium somewhere between?

I find Professor Lupin’s classroom to be the clearest example of a student-centered approach.  His lessons are very hands-on, with students taking the lead, learning to do things under scaffolded guidance, such as confronting boggarts in a controlled classroom environment.  And he begins every lesson by saying, “Will you please put all your books back in your bags.  Today’s will be a practical lesson.  You will need only your wands.”  This is the opposite of Umbridge’s practice.

Lupin is an encouraging teacher, asking the struggling Neville to take on challenging tasks, all while expressing confidence in his abilities.  Yet he is no pushover, either: he can be firm when the situation requires it.

We rarely see an entire period in Flitwick’s Charms classroom, but what we do see is constantly active, in motion, even chaotic.  Feathers flying upwards with cries of Wingardium Leviosa!  Objects fly with the sound of the Summoning Charm!  Yet no matter how much noise there is, no matter how much the students are talking, they always seem to be on-task.  This is a great example of how messy good learning can be: it may not always look like learning is going on.  But, as one student said when Umbridge began her Inquisition, Flitwick always sees his students through their exams.  His is an excellent example of student-centered learning.

“It’s not as efficient, as many suppose, to be told the point and then find the examples to support it.  It’s like being told the punchline and then trying to recreate the joke to fit the end…  Using the discovery method, we learn and internalize that learning by finding the point ourselves, by making it our own, by saying it, by stumbling towards it…  we must stop asking students to admire the fine conclusions we have reached or to be in awe of our knowledge of any given subject.  Instead, we allow them to lurch through to their own.”  –Leila Christenbury, Making the Journey: Being and Becoming a Teacher of English Language Arts

Jerome Bruner, a cognitive psychologist, theorized that we remember best what we discovered ourselves.  A teacher who teaches through discovery will structure his or her class in such a way that it allows students to come to their own conclusions, to test them out, to explore.  Discovery-centered teachers ask instead of tell, and aren’t afraid to answer questions with “I don’t know.”

We only see Dumbledore teaching a “class,” really a private tutoring, in one of the books: The Half-Blood Prince.  In these sessions, Dumbledore invited Harry to speculate, to guess, to explore the questions that Dumbledore was struggling with himself.  Dumbledore showed Harry what he knew, and asked Harry to learn what Dumbledore didn’t know.  They embarked on a journey of exploration together.  This was a true example of discovery-centered education. 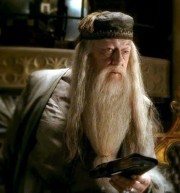 There is a lot more we could say about this series from an educational standpoint.  Rowling beautifully explores the power of marginalia annotation, and the bond formed by a shared text, in The Half-Blood Prince, for example.  Or, we could go through and try to set up a comparison between wizard fields and Muggle fields, and then look for hidden commentary: Potions is chemistry, obviously, but is Divination a dig at English and Literary criticism?  But, alas, I’ve already kept you long enough.  Suffice it to say, I love the portrayal of teachers in these books, particularly from a student standpoint, and I am grateful to see the spectrum of my profession given portrayal, from the bad to the good.

For further thoughts on the teaching styles of the Harry Potter series, particularly as they relate to corporal punishment, I found this link interesting.